10 Spooky Things To Do In West Yorkshire

Naturally, the best comes under “Things to do in Haworth” 😀 . Join me in walking around the beautiful village of Haworth, home to the Brontë sisters, and listen to the age-old stories of the ghosts and hauntings here. But if you happen to be heading out to one of the bigger cities, you can find some fantastic tours in Leeds and in York, too.

Keighley and Worth Valley Railway, Haworth 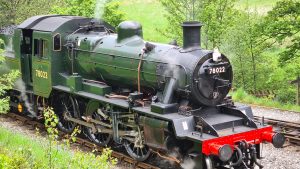 Still in the vein of “Things to do in Haworth”, there is the Keighley and Worth Valley Railway. Opened over 150 years ago, and now run by a group of dedicated volunteers, the K&WVR takes you back to an age of steam and rail only today seen in films. In fact, the railway and its stations have been used for more than a few film sets, including the famous “The Railway Children”. There are more than a few ghost stories associated with the line too, including the story of the ghost of Binns Bancroft!

The Graveyard, St Michael and All Angel's, Haworth

Of all the spooky things to do in Haworth, a walk through the  graveyard is possibly the most atmospheric. One can only imagine the effect that the imminent presence of death must have had upon the young and impressionable minds of the Brontë children. Most of the Brontë family are interred with Haworth Parish Church. Anne Brontë is the only member of the family not to rest in the family vault beneath the floor at the east end of the Church.

Up until late Victorian times, the village got its drinking water from wells that were fed from the moors and filtered down through the graveyard, resulting in much sickness and death. The graveyard has been in use since at least the 14th century and many visitors have reported ghostly experiences.

Moving into the realms of  “Things to do in West Yorkshire” proper, there is Bolton Abbey. It is reputedly haunted by the ghost of an Augustinian monk known as the Black Canon due to his dark cassock, hat and cloak. It was apparently witnessed by the Marquis of Hartington in 1912. Visitors claim to have heard his footsteps wandering around the rectory

Sir Henry Irving, the famous Victorian Shakespearean stage actor died on the main staircase of the Midland Hotel in Bradford after his appearance at the nearby Theatre Royal in 1905. He was accompanied at the time by his manager and famed author of Dracula, Bram Stoker. It is said that his ghost haunts the hotel to this day, with sightings both in the hotel lobby and in the room he slept in the night before his final performance.

Shibden Hall dates back to 1420 and its architecture reflects the mix of styles of its interesting and diverse history. Shibden Hall is perhaps most famous as the home of Anne Lister (1791 – 1840). The hall and outbuildings are believed to be haunted by previous owners, the most prominent of whom may be Anne Lister’s lover, Ann Walker, her spirit haunting the red room where she barricaded herself in the years after Lister’s death and attempted to commit suicide.

One of the more famous of the spooky things to do in West Yorkshire, Bolling Hall is one of the oldest buildings in Bradford, built in the 14th century. The earliest report of a haunting occurred in 1642 when the Earl of Newcastle, who was staying Bolling Hall preparing to take Bradford for the Royalists, claimed that his bed cover had been tugged, waking to see a woman wringing her hands, telling him to “pity poor Bradford”. The Earl had intended a bloody onslaught, but after this experience he changed his mind, and instead ordered his troops to only kill those who offered resistance, resulting in just a handful of people being killed.

The tiny village of Cottingley, just outside Bingley nr Bradford, is the location of Cottingley Beck, home of the famous Cottingley Fairy photographs. The five photographs were taken by two schoolgirls, cousins Elsie Wright and Frances Griffiths, near the Beck between 1917 and 1920. Edward Gardner, head of the Theosophical Society, and Sir Arthur Conan Doyle believed the fairies were real. Sir Arthur went on the record declaring the photo authentic in an issue of The Strand Magazine in 1920.

The beck runs behind private homes, so it is important to respect the privacy of the people who now live there when visiting.

The most famous ghost of Oakwell Hall was recorded by Elizabeth Gaskell, Charlotte Bronte’s biographer. Captain William Batt was owner of the house in 1684. Mrs Gaskell wrote: “They show a bloody footprint in a bedchamber of Oakwell Hall, and tell a story connected with it, and with the lane by which the house is approached. Captain Batt was believed to be far away ; his family was at Oakwell ; when in the dusk, one winter evening, he came stalking along the lane, and through the hall, and up the stairs, into his own room, where he vanished. He had been killed in a duel in London that very same afternoon of December 9, 1684.”

After all those spooky things to do in West Yorkshire, it’s back to Haworth! How better to finish up with some great food and some shopping? Haworth Main Street continues to go from strength to strength with some amazing independent shops such as Siân Alison Designs, Hawksbys and more, great food outlets like The Clothe Store and traditional pubs like The Fleece Inn, The Black Bull and The Old Hall Inn. And the pubs come with added hauntings!

This is just a sample of some of the amazing things to do in West Yorkshire. Whether you live here, come for the day, or are here on holiday, I guarantee that you will find some incredible things to do in God’s own county!