“I sometimes dream melancholy dreams,” answered Caroline; “and if I lie awake for an hour or two in the night, I am continually thinking of the rectory as a dreary old place. You know it is very near the churchyard. The back part of the house is extremely ancient, and it is said that the out-kitchens there were once enclosed in the churchyard, and that there are graves under them. I rather long to leave the rectory.” 1
Shirley, Charlotte Brontë, Chapter XIII

IMPORTANT NOTE: Since I wrote this blog post, I have received feedback that the Parsonage was, in fact, built on a separate field divided into two halves, upper and lower, with the Parsonage built on the upper. At the time of its construction, the graveyard was confined to the area south of the church and only extended around the Parsonage after it was built. Doh.

Jon Beynon has been kind enough to inform me that “burials extended around the parsonage and its garden after it was built. Originally referred to in documents as The Glebe House, the parsonage was built on part of an open field called Halsteads which was purchased by the church trustees from Richard Emmott, a large Haworth landowner, who was then living in Hertfordshire… The field, Halsteads, had two areas, Upper Halsteads – where the Parsonage now stands – and Lower Halsteads” and that “Upper Halsteads had been leased by Emmott to James Wood of the Bull Inn, before it was sold to the church for the specific purpose of building a house for the incumbent. Burials at this point were confined to the area south of the church and did not extend as far as Upper Halsteads. There was plenty of space in open fields to build and no need to move or cover any graves.”

This information was researched by the late historian Jocelyn Kellett for the Bronte Society in 1977. As I have already shared links to this post, I leave it up with this notice as a cautionary tale against excitable storytellers 😉

Reading Shirley recently, I was very much struck by this passage. Frequenting the graveyard at St Michael and All Angel’s in Haworth as I do, I had noticed that much of the land of the old Parsonage seemed to protrude into the graveyard itself. Without the presence of the Parsonage, the churchyard would naturally lend itself to a rectangular shape but the Parsonage chops it into an irregular L.

Digging up the earliest map with any detail I could find, an old Ordnance Survey map from 1852, this became very apparent. The current Parsonage has extended further back beyond the boundary of the graveyard. Yet in 1852, it was quite clear that the grounds were contained in what appeared to be the original burial grounds.

The burial register for the site goes back to 1645 2 but there has been a building for worship on the site since the 14th/15th century 3, and the site appears to have been in use for burial since even earlier. In a 15th century will, one John Pawson wrote “Ego Johannes Pawson, caps 4 de Haworth, of sound mind, April 13th, 1431, gave his soul to God Almighty, the Blessed Mary, and All Saints, and his body to be buried in the cemetery of St. Michael the Archangel de Haworth.” 5

The Parsonage itself was constructed in 1778-79 6, some 133 years plus after the first registered burial and 347 years after the date in John Pawson’s will. While it is possible that the land may have been clear of graves, it seems more likely to me that in order to build the new rectory, the graves were cleared and/or built over. At the very least, I’m pretty sure that the prospect suggested itself to Charlotte as she grew up in Haworth, overlooking the heavily used graveyard every day, and influenced her thinking and writing as she grew older.

“As to a sentimental peculiarity of the vicinage, I believe the first owners had not known nor reckoned it in their choice of ground. The short, green, flower-bearing turf around covered an ancient burying-ground – so ancient that all the sleepers under the flowers had long ago ceased to be either clay or bone, and were become fine mould, throwing out violets in May, and a carpet of close silken grass all spring, summer, and autumn. These violets were white, and in their season they gathered thickly in a· bleached wreath about what seemed a deep-sunk and iron-grey rock – the sole left foundation stone of a forgotten chapel, or the basement of a cross broken away.” efn_note]Bronte, C., Brontë, C. (1993). Unfinished Novels. United Kingdom: A. Sutton.[/efn_note]
The Story of Willie Eilin, fragment two (an unfinished story), Charlotte Brontë 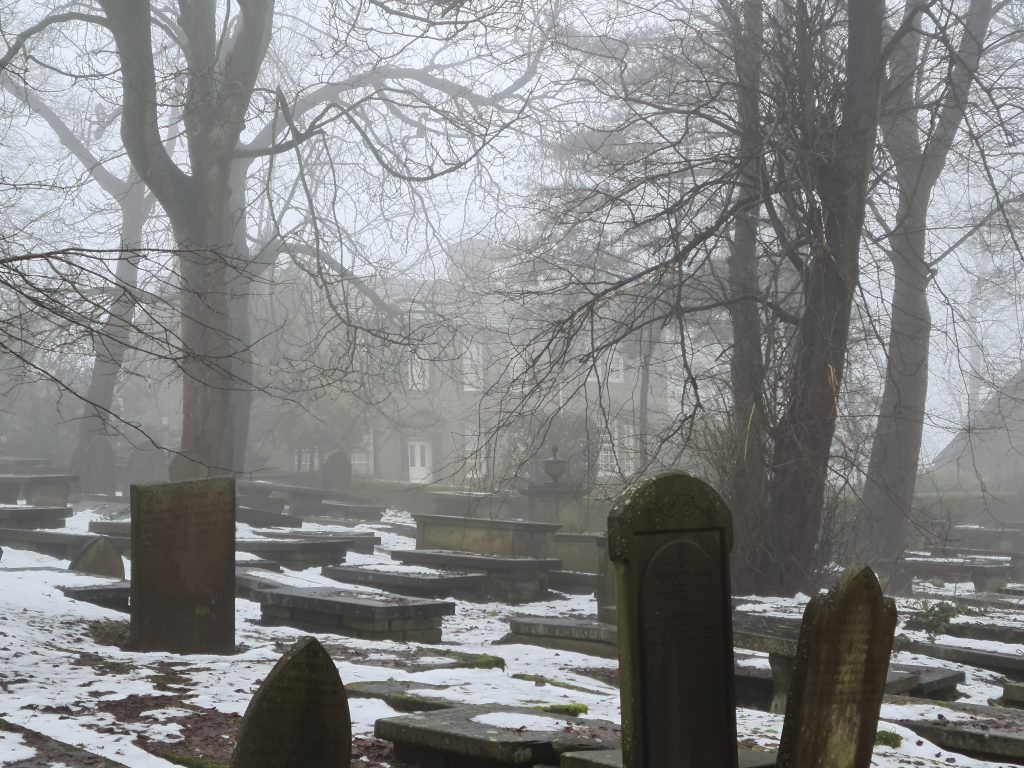