The Brontë children’s nursemaid, Tabitha Ackroyd, had an intimate knowledge of the lore of the land and its spirits. She knew folk who had seen the fairies that frequented the beck on moonlit nights. But by the time she was nursemaid to the Brontë family, she would tell the children that all the fairies had long since gone. “It wur the factories as had driven ’em away,” she would tell the children1.

Yet fairies are notoriously tricksy. The language of folk and fairy tales should be a clue: glamour, mischief, trickery. We should have known that where fairies are concerned, we cannot trust our eyes.

In our modern, scientific age we pride ourselves on being able to categorise and catalogue everything. From the Enlightenment through to the Industrial Revolution, reason came to dominate every area of human activity. There was no room in human thought for fairies. They became the stuff of childrens’ storybooks.

The scientific minds of the Victorian era maintained a fascination with ghosts. The hunt was on to find proof of an afterlife within the new phenomena of magnetism and electricity2. Yet even when we relegate them to stories, we like to think of ghosts as the restless haunting echoes of a specific dead person. Fairies belong to another category of spirit, so we say. Distinctions Branwell Brontë clearly clung to when he referred to “a Spectre neither at all similar to the Ghosts of those who once were alive nor to fairys and silvan Creatures nor to Demons and the powers of the air”3. But this rigid distinction was, and is, a modern conceit. Try though we might to put ghosts in one box, and fairies in another, it has never been so simple. There has always been crossover, a blurring of distinction. Ghosts of whom there is no record of a living person, just a… haunting. Spirits of the dead who have, in the manner of their dying, become something other than a simple ghost. Often something more terrifying.

For example, the White Lady is a classic type of haunting. Very often associated with legends of a tragic love, unrequited or betrayed, and an even more tragic death. Yet, such hauntings can have strong elements of fairy lore too. In 1881, a Mr Hughes met the White Lady of Lognor, Shropshire, crossing a narrow footbridge. Assuming she was a mortal girl and thinking to scare her, he attempted to clasp her suddenly in his arms. He was astonished to find her vanished! On another occasion, she appears to have attended a local village dance. No-one noticed the peculiar nature of their otherworldly guest, though her neighbours could never catch hold of her hand4.

In Wales, as with other Celtic nations, the language used to describe the “otherworld” and its occupants covers both fairy folk and the dead. Katharine Briggs said that “in the Highlands, in Wales and in Cornwall fairies were sometimes ‘vaguely called “spirits”, with a kind of implied suggestion that they were the spirits of the dead. Sometimes they were described without qualification as the dead, or said to have the dead among them. More often they are qualified as a special kind of dead.”5

Then, in the 20th and 21st centuries, we have the UFO phenomena. So intimately linked with fairy lore (abductions, different passing of time etc) that David Southwell of the Hookland Guide refers to them as Unidentified Faery Objects6. West Yorkshire and the South Pennines have gained something of a reputation as a hot-spot for UFOs and anomalous light phenomena over the last 40 years or so. Anyone as old as me will remember Erich von Däniken. Däniken published a series of books claiming to prove that UFOs were evidence that ancient Gods were actually aliens who had visited Earth. Another writer, Jacques Vallée, suggested something far more interesting.

Vallée suggested that the UFO encounter was real, but that it was not extraterrestrial. He argued that it was a continuation of the encounters described in folklore throughout humanity’s history7. Fairy encounters, abductions, encounters with magical beings, all needed new manifestations in the age of reason.

Tabby was mistaken in thinking that the factories had driven the fairies away. The fairies are tricksy. Glamour (n. Archaic Magic cast by a spell; enchantment.) and mischief are, according to the old stories, their stock-in-trade. At least when it comes to dealing with humans. Things are never what they seem. The fairies aren’t going to go away. They are going to wrap the world around themselves differently. If you want to see them, you are going to have to look sideways. 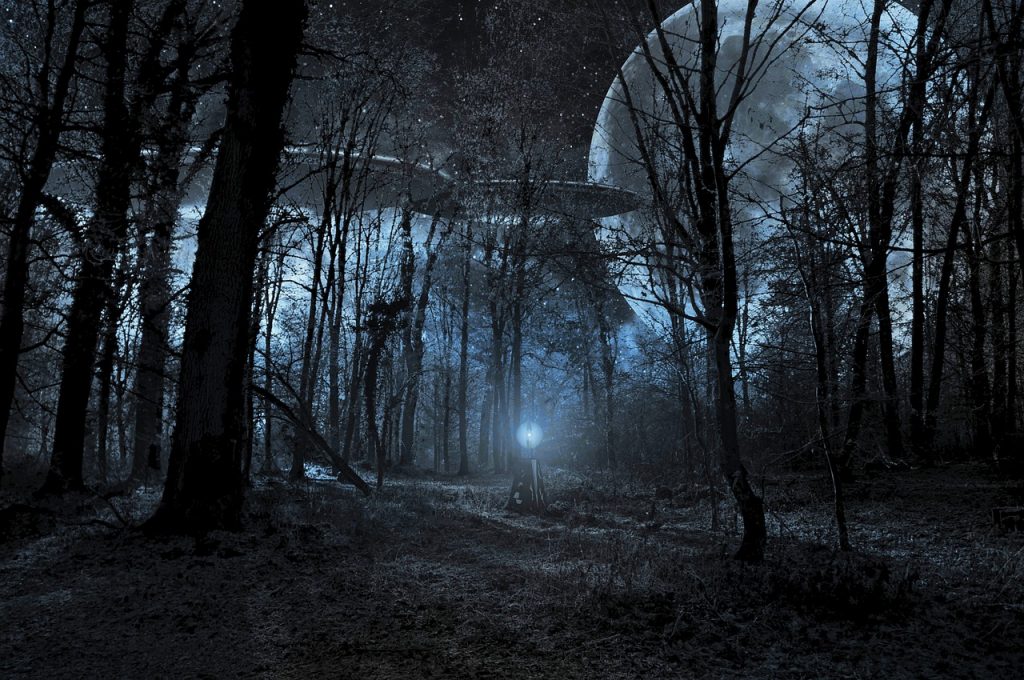