The Mysterious Stone Heads of Haworth

Haworth has, as far as I am aware, four carved stone heads adorning several of its buildings. The heads are all different ages and we know little of their purpose. The oldest is the one above the main entrance to The Haworth Old Hall (once the Emmott Old Hall). This is part of the original building, which would place it in the early 1600s. The most recent is a modern addition to The Old Sun Hotel on West Lane. The pub itself harks back to the 18th century but the stone head above the main entrance dates from 1971.

The remaining two stoneheads are attached to private houses. The one on the corner of the roof of 52 West Lane appears to have been part of the original building. This dates it to the mid 18th century. The stone head on the gable end of 65 Sun Street appears to be attached to the wall some time after construction.

I have been unable to find information about the origins of these last two heads. The one attached to number 65 West Lane has a classic “Celtic” appearance. The one attached to 52 West Lane is rather unusual and distinct from the others. The face itself is in a “Celtic” style with its simplified features, but its column shape is quite unusual. The fact that the mouth is a hole suggests that it may have once been a gargoyle. It may have served to carry rainwater from the roof away from the wall. Gerald Dodd1 suggests that it is a form of weather influencer of a type our Viking ancestors called a “Nidstrong”. Dodd claims that “they would have preferred a horse’s head or a pair of stag’s horns, but the Celtic influence made the builders settle for a human head”. Unfortunately, this doesn’t seem to be what a “Nidstrong” is. I assume he meant nithstang or nidstang, a cursing-pole or scorn-post. I suspect he was referring to the horse-head gables of Norse/Germanic architecture. In which case it is unlikely that there is any connection at all. If anything, the stone head at 52 West Lane has a more serpentine feel.

Of the two stone heads attached to the buildings that are now public houses, we can say so much more. The popular legend associated with the Old Hall stone head is that it is a memorial to a worker who died during the construction of the building. I have long found this explanation suspect, as the life of a construction worker back at the turn of the 17th century would have been dispensable. I might be about to change my mind for reasons I will explain shortly.

The carved head above the entrance to The Old Sun Hotel was, as I mentioned earlier, placed there in 1971. Before that, the pub had been haunted for a good many years. Reports varied about the nature of the haunting. Some described it as a disembodied voice2. Others refer to an apparition of an old pack-horse carrier dressed in a long leather cape3. John Billingsley4 reports that one Arthur Saul of the “Bradford Museums Service” confirmed the details of The Old Sun Hotel haunting for him. Arthur Saul had frequented the pub while the haunting was active. The then landlord, if busy, would often invite him to pull his own pint. On occasion, if the tap-room was empty, a voice would be heard asking something like ‘What are you doing?'”. But all reports concur that the landlord at the time, Rennie Hollings, feared that such a story of a ghost may effect his trade. In the end, following local tradition, he had the stone head commissioned. He then placed it above the main entrance as a means to ward of the haunting spirit.

John Billingsley has made a study of such stone heads and their appearance throughout the South Pennines. Looking in detail at the locations of these heads and at the myths and legends associated with the severed human head throughout Britain, he concluded that were we find such heads are “where spiritual disturbance may be expected – possibly from disembodied souls or other denizens on the edge of reality… or where spiritual experience and understanding may be acquired – perhaps at the well or spring, traditionally the fount of wisdom, or at the burial mound, the ‘Sidhe’ or magic dwelling place”.

Given Mr Billingsley’s conclusions, finding such a stone head at The Old Hall Inn may come as no surprise. The hauntings there go back many hundreds of years. Maybe this sheds light on the idea that the stone head is related to the death of a construction worker during building. Perhaps it isn’t a memorial to a tragic work accident. These heads appear in places associated with hauntings. They are a form of folk magic, either intended to ward of spectral beings or to placate the spirits of the dead. A worker did die in tragic circumstances during the buildings construction. But rather than memorialise him, his colleagues chose to placate his restless spirit. 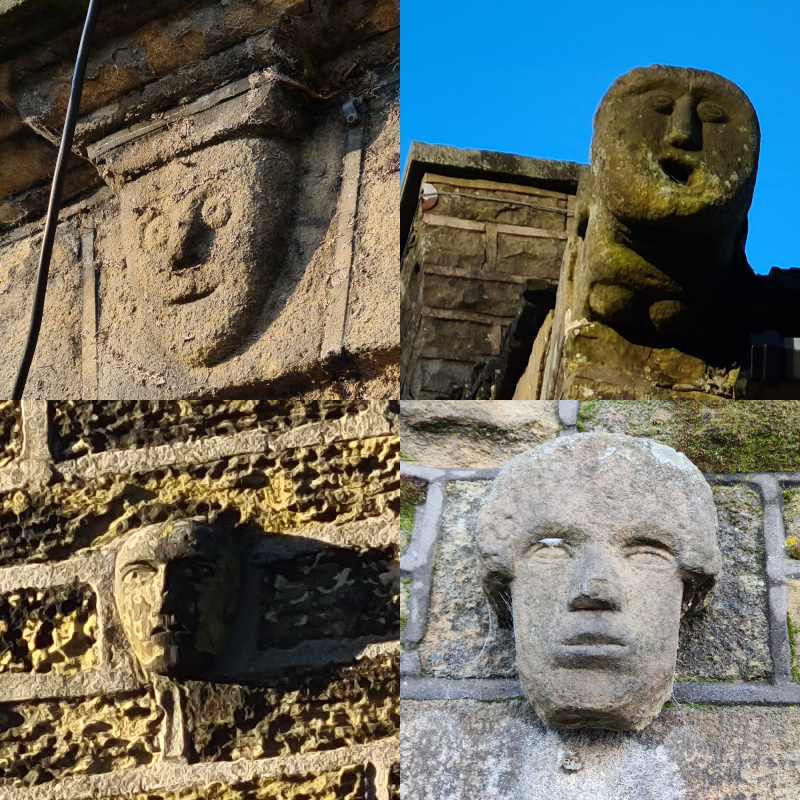