The Gytrash: Ghostly Black Dog of The Brontës

The soil of the islands of Britain can be said to be soaked in the folklore of the spectral black dog. Mark Norman’s “Black Dog Folklore”1 lists sightings from Aberdeenshire to Yorkshire and beyond. Wherever they are said to roam, they are known by local names… the Whisht Hounds of Dartmoor, Black Shuck (Old Shuck, Old Shock or simply Shuck) in East Anglia, the Barghest in many parts of the North of England.

In Wales, we have Cŵn Annwn, “hounds of Annwn”, the spectral hounds of Annwn, the otherworld of Welsh myth. Their appearance portends death and their growling gets quieter and softer as they draw closer. And in some areas of the English North, we have the Gytrash!

The phantom black dog is often, although not always, seen as an ill omen or a portent of death. It is is characterised by its terrifying size. Often, it is distinguished by the supernatural appearance of its eyes or some other aspect. While their preferred form is canine, they are shapeshifters.

J. Horsfall-Turner2 writes that “the appearance of Old Trash is considered a certain death-sign, and has obtained the local names of ‘Trash’ or ‘Skriker’. He generally appears to one of the family from which death is about to select his victim, and is more or less visible according to the distance of the event. I have met with persons to whom the barghaist has assumed the form of a white cow or a horse but on most occasions Trash is described as having the appearance of a large dog, with very broad feet, shaggy hair, drooping ears, and ‘eyes as large as saucers.’ When walking, his feet make a loud splashing noise, like old shoes in a miry road, and hence the name of ‘Trash.'”

We most famously encounter the Gytrash in Charlotte’s ‘Jane Eyre’3:

“As this horse approached, and as I watched for it to appear through the dusk, I remembered certain of Bessie’s tales, wherein figured a North-of-England spirit called a “Gytrash,” which, in the form of horse, mule, or large dog, haunted solitary ways, and sometimes came upon belated travellers, as this horse was now coming upon me. It was very near, but not yet in sight; when, in addition to the tramp, tramp, I heard a rush under the hedge, and close down by the hazel stems glided a great dog, whose black and white colour made him a distinct object against the trees. It was exactly one form of Bessie’s Gytrash, a lion-like creature with long hair and a huge head, with strange pretercanine eyes. The horse followed, a tall steed. Nothing ever rode the Gytrash: it was always alone.”

This is turns out to be Rochester’s huge dog Pilot, rather than the spectral dog!

It was not only their nursemaid the children would have heard tales of the gytrash from. They were family friends with, and regular visitors of, the Heatons of Ponden Hall. The Hall was said to be haunted by its very own gytrash. In an unpublished manuscript4 Branwell describes a Gytrash… “a Spectre neither at all similar to the Ghosts of those who once were alive nor to fairys and silvan Creatures nor to Demons and the powers of the air it does not confine its forms to the Human and indeed most seldom appears in such a form a Black Dog dragging a chain a dusky calf nay even a rolling stone or a self impelled cart wheel are more commonly the mortal coil of the Sullen Spectre But the Darkwall Gytrash was known by the form of of an Old Dwarfish and hideous Man as often seen without a head as with one and moving at dark along the naked feilds which spread round the Aged House its visits were connected in all mens minds with the fortunes of the family he hovered round and evil omens were always drawn on such occasions and if tradition spoke true fullfilled upon them.”

Branwell’s biographer, Winifred Gerin, confirms that this description matches the tales told of Ponden Hall and the Heaton family. In 1899 the author Halliwell Sutcliffe wrote “There was an odd ghost at Ponden, if gossip is to be believed, and to-day they will tell you minutely the path taken by the phantom. Sometimes it came as a shadowy greybeard, carrying a lantern ; but oftener as a flaming barrel which rolled down the fields, and past the house-front, and along the curving highway, until it came to rest in the hive-holes — a sheltered corner where the Heatons used to keep their bees.”5

Marie Campbell in her book “Strange World of The Brontës”6 tells us that the name ‘Trash’ was enough to send villagers scurrying home to bar the cottage doors against him… even as recently as the 20th century! 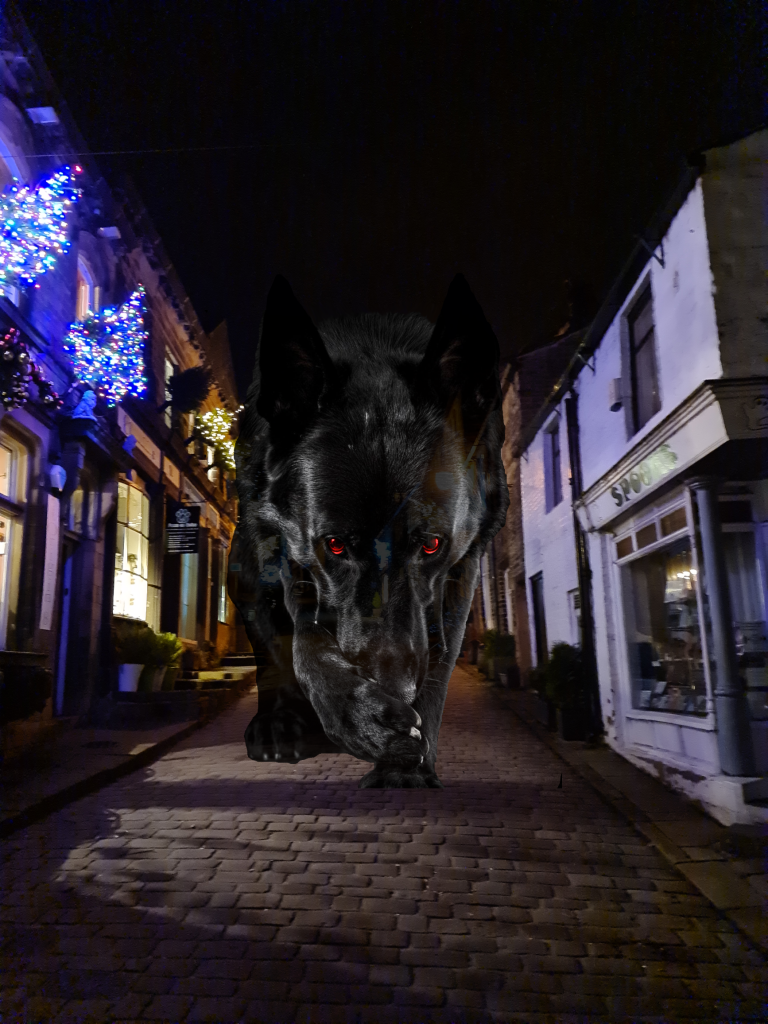